So, just a while ago I’ve decided to sample the premiere of Evangelion.

For most of anime fandom, Neon Genesis Evangelion is not only an anime, it is THE anime. Touching the lives of many, while also repulse many others. Evangelion is also one of the most influential anime of all time, changing the entire industry cultural landscape and serve as the gateway for many other thought-provoking show.

It’s almost impossible to become an anime fan without at least coming across the series title. I ran into the title myself just few years ago, but never got around to actually watch the show, thinking it may going to be too deep for me.

Despite that though, the show did piqued my interest which prompt me to research it, which have the unfortunate consequence of finding out many spoiler about the series. What interest me the most from my little research however, is that I found out that the show is, for the large part, about broken people coping with circumstances (and also meta-critique of otaku culture), which gave me a semblance of hope that this probably is going to be THE show for me. While I’ve never been any good when it comes to analyzing character writing and I don’t think I’ve ever been in the same depth of psychological brokenness as any of the characters in the series or ever been as depressed as the creator of the show, Hideaki Anno, was during the production of the show, I might perhaps can relate to and/or emotionally resonated with the struggle that the characters are going through.

And even if I ended up not going to understand the show, part of improving your critical thinking is exposed yourself to a variety of different shows and try to analyze every single one of them. So hopefully, watching Evangelion may do just that for me. 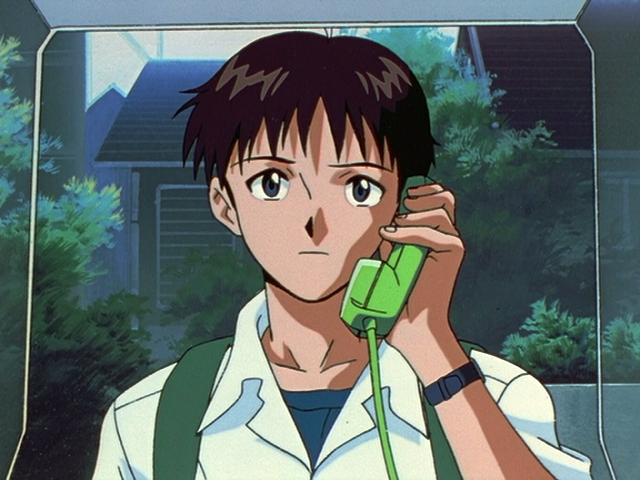 So anyway, what about the premiere itself? Well, there’s really not much to write about. It’s all pretty much an introduction which established the basic variable, like who’s our hero and who are they fighting. We get to know our protagonist, Shinji Ikari. He got called by his father, Gendo Ikari, to pilot his organization secret weapon to fight against mysterious monster named Angel. Shinji initially doesn’t want to pilot the giant robot, but one emotional blackmail later however, he reluctantly agree.

The part where Shinji doesn’t want to get into the giant robot is something that I like go into further slight detail (it is the highlight of the episode after all), but there’s something that I wanted to talk about before that.

First off, I like how the series handle the worldbuilding. They didn’t dump all of the information at once, just the ones that’s important for the episode. NERF, the organization that Shinji’s father work in, is the good guy, and the Angel is the enemy that couldn’t be defeated by ordinary means. I also like the “show don’t tell” exposition style that the series employ. My favorite moment of it was the quick cuts of young Shinji crying while carrying a bag when Shinji reminisce about his father which enough to tell us that he was abandoned and how he felt about it at that time. There’s also few impressive old-Gainax animation.

So okay, let’s talk about that scene.

The whole Shinji doesn’t want to get into the robot thing, are quite popular recurring moment in the series. So much so that it becomes a meme. When I first found out about it, my initial thought was how Evangelion decided to play it “realistic”. After all, Shinji is still a young boy who was ordered by his own suddenly-appeared-out-of-nowhere father to pilot a machine and risk his life to save the world. But, after watching the scene myself, I have different reading into the scene, or rather, there’s more to the scene than I thought.

So here’s my take. Shinji refusal to pilot the Eva was less about his fear of dying or the mere impossibility of him saving the world (okay,those things probably plays into factor) but more about his resentment and disappointment with his own father.

Okay, that sounds somewhat vague. To clarify that, let’s imagine being Shinji for a minute.

Imagine that you were neglected for your entire childhood.

Imagine that you were abandoned by your own father.

Imagine that all of a sudden, your father called you, giving you the slight hope that your father do wants to connect with you only to have that reunion ruined by the fact that your father only called you to do his bidding to become one of his sacrificial pawn to prevent global catastrophe which he does so without seemingly any hesitation or any regard for your safety.

Yeah, its easy to understand how he would be kind of upset.

Welp, I guess that’s all I wanted to talk about. Here’s to mind-fuck journey!